This weekend I started my bacon for February’s Charcutepalooza challenge. I popped over to Savenor’s in Cambridge where one of their butchers rolled out an entire pork belly on his wood block and asked how much I’d like. I wanted it all, really, but managed to limit myself to a cut that ended up just shy of 5 lbs. I was going to ask for 3lbs, just enough to make 2 good sized slabs of bacon, but remembered a delicious crispy pork belly dish at Craigie on Main, and wanted some extra for cooking.

Ever wonder what 5lbs of pork belly looks like?

For the homemade bacon, I cut out two slabs of about 1.8 lbs. Not for any particular reason, but that’s just how they came out. I prepared the salt cure mix as described in Ruhlman‘s Charcuterie and then added my seasonings – brown sugar, maple sugar, maple syrup. I rubbed one of the slabs with a bit of homemade cajun seasoning (cayenne, allspice, paprika, garlic and onion salts, black and white pepper) before rolling in the salt cure, to see if I could get a bit of heat in with the sugar.

can't wait til this is bacon

Well, these two are now hanging out in the fridge, and I’ll get to cut them up and smoke them next week.

In the meantime, I took the left-over bits of pork belly and made a quick meal. I had a bit of pork broth left over from my weekend boudin project (more on that soon, I promise!), but a seasoned chicken broth will do just fine. If your broth is plain, add some dried herbs during the braise, and the pork fat will do the rest of the magic. 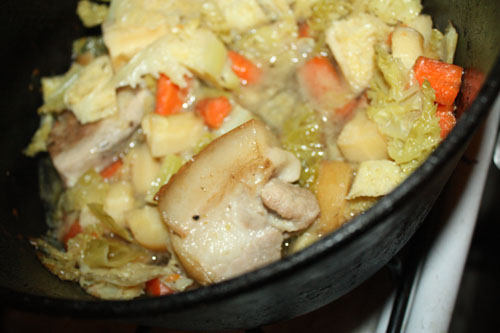 Braised Pork Belly with Cabbage, Parsnip and Carrots
1 lb (or more!) pork belly
1 head small savoy cabbage
2 carrots
2 parsnips
1 – 1.5 cups broth
Preheat the oven to 375F. Wash the carrots and parsnips but do not peel. Halve and cut into 1″ long slices. Remove the heart of the cabbage, halve, then chop roughly.

Heat a cast iron dutch oven over medium heat. Add the pork belly, fatty sides facing down, and brown on all sides. Once browned, add broth with the carrots and parsnips, along with salt and pepper to taste. Place cover on dutch oven and braise at 375F for 40 minutes. After 40 minutes, stir in cabbage, and braise for another 5-7 minutes, until cabbage is soft. If your cabbage hasn’t wilted, you can stir it on the stove top removed from heat, as the cast iron will retain some heat for a while.

This entry was posted in charcuterie, cooking and tagged bacon, braise, charcutepelooza, pork. Bookmark the permalink.

One Response to Bacon Challenge, and Braised Pork Belly